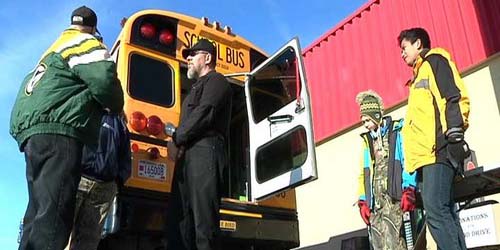 Saturday they took a school bus and organized the Fill the Bus fundraiser to help.

“I think there’s a need everywhere,” said Dale Anderson Jr., a mechanic for Lamers Bus Lines and organizer of the Fill the Bus fundraiser.

“With all the bus drivers here who bus a lot of kids to school, a lot of the families— hopefully we can help out some of those families that are struggling,” Anderson Jr. said.

These families are struggling because they don’t have enough to eat.

That’s why Anderson organized the Fill the Bus.

He hopes to fill an entire school bus with food that will be donated to the Sparta Ecumenical Food Pantry.

“You gotta have food if you want to survive,” said Richard Drew, a special needs bus driver for Lamers.

Drew said almost half of the students on his bus use the food pantry. That’s why he’s volunteering.

“I can’t imagine not having food on my shelves to feed my kids. And I know there’s people out there who go though it, not knowing where they’re going to get their next meal,” Anderson said. “If this would even help out five people, it’d be worth it.”

These bus drivers are hoping a bus-load of food makes a difference.

Since this is the first year of the fundraiser, organizers haven’t set a goal for how much food they want to collect.

The group is hoping to make Fill the Bus an annual fundraiser.

Be a hero for kids in your community! Train this summer and be ready to drive students in the fall.