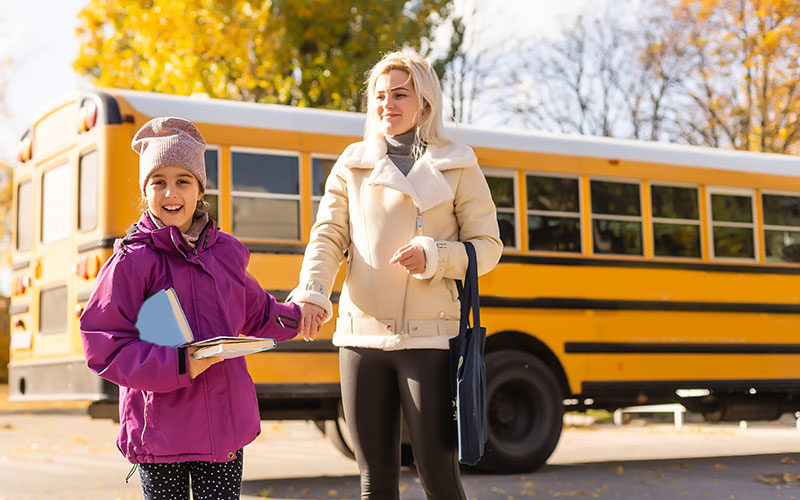 According to Parents Magazine, since the pandemic began, childcare costs have increased more than 40 percent. And in Wisconsin, the average cost of childcare is $11,382, according to move.org. That’s just under 20 percent of the average income.

That’s a significant chunk of change for both single-parent households, and households with two working parents. But the majority of jobs and professions require that parents find childcare during those working hours.

School bus driving is the exception. In addition to the obvious benefit of bringing their school-aged children to school each day, parents who drive school bus can also bring their younger children on the bus with them. That eliminates the need to enroll their kids in daycare. So, parents are not having to pay more then $11,000 for daycare costs, plus they’re earning more to contribute to the household income.

Moms and Dads want to support their children in their hobbies and interests. And if your child is involved in sports or other extra-curriculars, you know exactly how much time is spent going to away events and games. As a school bus driver, parents can attend the events as they normally would. But instead of following the bus in their car, they could drive the bus, essentially getting paid to do something they would do for free.

Plus, in the age of school bus driver shortages, you would know that your child would always have transportation to their games!

School Bus Drivers are usually the first person a student sees outside of their family. And a friendly “Good Morning” can start everyone’s day on a positive note. As a bus driver, you’ll get to know many of your child’s classmates, and have a positive impact on their lives.

Just like the teachers and everyone who works in the school building, you’ll become a memorable part of the lives of the students on your bus, and you’ll be better aware of what happens at school.

It’s blustery and cold and school is cancelled. At any other job, you must scramble for someone to watch your kids and navigate the weather to be to work on time. Or you call-in and risk job loss. As a school bus driver, if school is cancelled, you’ll have off work too. There’s no last-minute scramble.

The same holds true on early release days, school breaks, and summer vacation. When your kids are off school, so are you!

According to the U.S. Census Bureau, a year ago in January of 2021, around 10 million mothers in the U.S. were not actively working, accounting for 1/3 of all moms living with school-age children. Because of the needs of virtual learning, or their jobs temporarily shutting down or being eliminated altogether, moms disproportionately left the workforce, and were slower to regain their employment.

While school bus drivers weren’t immune to the shutdown, when schools shut down, our working moms were better able to transition to the virtual learning model for all of the previous reasons we’ve listed.

Overall, moms and dads should consider becoming a school bus driver because it’s a great thing they can do for their kids, and kids throughout their community. Parents who want to learn more can contact their local Lamers Bus Lines office to learn more. And we’ll even let you test drive a school bus, so you can see that it’s something you can definitely do.